Working for the Weekend

Most of you guys know, but both JT and I are full-time workers.  Really most people are full-time workers but there are a lot of bloggers out there who are not 8-to-5 office types so I thought I would say it.  We’re 8-to-5 office types.  And lately for both of us the office stuff has been a little hectic.  So after an 8-to-5 or 7-to-5 or 7-to-7, neither of us really want to come home and do a lot of little stuff around the house.  So we don’t

But when the weekend rolls around, there’s so many free hours to work on all those little (and big) projects that go unnoticed during the week.  And small steps keep getting made.  I’m sorry if these little things are a little boring or tedious, but for us, it’s all we got right now.  At some point, I’d like to have some amazing *ta-da* before and after pictures.  But right now we’re kind of in the middle of everything and just taking baby steps to get on through.

So here’s this last weekend’s progress. 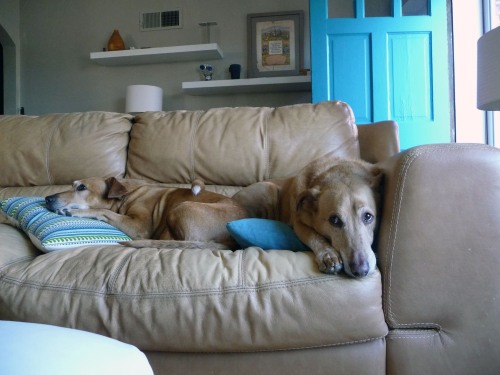 Wait, that doesn’t look like progress, that looks like laziness.  We actually took the dogs to Francis Park (a gem in South City) and ran them around so they were pretty bushed.  It wore us down too but when there’s nice weather and some sunshine, you gotta get out. (And projects gotta wait.  Them’s the breaks).  But for those of you with very discerning eyes, you may notice that I did paint the vent cover on the back wall that was driving me bananas.  Small thing, but it helps it blend away more now that it matches the wall color.  (It would be even more hidden but I took down the peperonia plant to water it and left it on the windowsill to get a little sun for the day.)

The other little thing I did was some spray paint fun.  We have had this nice large ice bucket for some time. (I think I got it as a college graduation present from my aunt and uncle?  Like I said, long time.)  In our first apartment, the baby blue made sense.  Now I wanted to make in our more sapphire/teal blue to give the kitchen a little color (and a little more storage.)

That before picture of the kitchen make me shudder and that was only a few weeks ago.  It feels so much different in there now!  I started out with the same spray paint I used on my “T” collection a little bit ago here.  But it ran out and a spray paint hunt ensued.  I visited Home Depot AND Lowe’s and neither had an exact match.  So I ended up having to start over with a Valspar can I got at Lowe’s.  The color had more blue and a little less green than the previous can, so I had to re-coat and re-coat.  And my little Rustoleum attachment spray handle didn’t work on the Valspar can either.  Boo.  I ended up Smurfing myself a little by getting some blue back-spray on my hand.  But it was worth it (although this next picture is a little underwhelming – the color is so much nicer in real life . . . .) 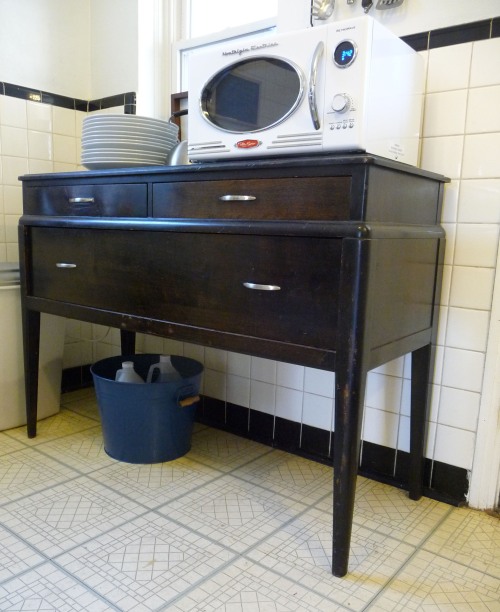 Now we have a nice out-of-the-way place for all our oils and vinegars that we buy in bulk.  JT and I cook a lot and from scratch too so our kitchen gets pretty heavy use.  I’m thinking on the upcoming IKEA trip (how many times can I mention this trip before it happens?  I think I’m up to 6.) I will get a little plant stand on wheels to put under the bucket and make it a little more useful so it can just roll out from under the buffet.    I also did my “I hate cords” trick and taped the microwave cord and it’s extension cord to the back of the buffet.  Cords be-gone!

We also had a visitor who bought one of our Craigslist items.  One down, one to go.  Now we’re left with this . . .

Just a little microwave cart waiting for a new home.  I moved Little Walter (the tree) over to this spot — he’s sick!!!  I had purchased and photographed him a few weeks before I got around to posting about him and now he’s not doing so good!  I’m hoping by moving him away from the exterior wall, he will stay a little warmer and spruce back up. I also watered him a little more but I have anxiety about over-watering and thus drowning my plants.  I set him up on the milk crate for now because a) I kind of like the height and am using it as a placeholder and b) I’m kind of nervous Shenanigan will lift his little stubby leg on Little Walter so I wanted to get him used to having a big plant near his level.

Any other ideas on what to do for poor Little Walter?  I was holding off on re-potting him until after the IKEA trip (#7!!) but I may have to bite the bullet and do it now.

Have a great week everyone — it’s 8:08 now and I have some office craziness to attend to!

2 responses to “Working for the Weekend”