(Sorry for the cheezy post title.  And apparently being a vegan means you spell cheese with a “z”.  Or at least the “cheeze” vegans eat.)

So, this change/upheaval in my diet has also wreaked a little havoc on our kitchen.  Every dinner begins with chopping broccoli (cue Dana Carvey) and ends with a load of dishes.  Our kitchen is TINY! and only has one 8′-6″ run of counter top (with a sink in it).  So, cooking is fun.  I feel like putting up a sign that says “lather, rinse, repeat” because the chopping, washing, dish-putting-away cycle seems endless sometimes. 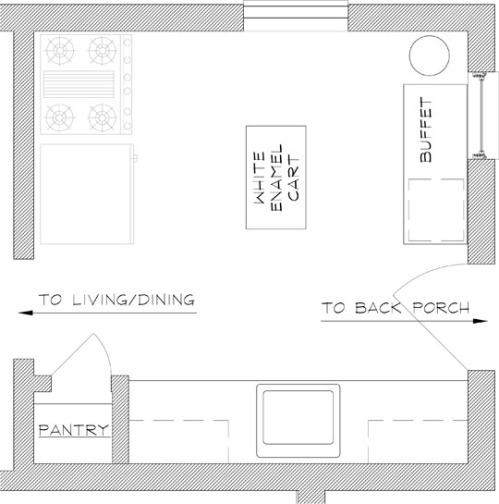 I’ve been looking for ways to streamline/simplify/organize and stumbled on a few.  #1 – Pot Lid racks from the Container Store.  This is one major base cabinet we have for cooking pan storage stuff.  In a perfect world the racks should have been mounted a tad lower on the door but I just centered them and hung them before I fully conceptualized how the dang things actually worked.  But all in all, this is a great space saver and makes the lids a lot easier to grab since they’re not all jumbled up like they were before.

#2 – Cookbooks!  Right now I have been checking out a lot of cookbooks from the library to see which ones I would like to purchase for long-term use.  And of course I print out recipes from Pinterest or the interwebs in general and just stick those on the fridge with a magnet.  I started pinning a bunch of ideas for cookbook storage and then happened across this little rack for $1.81 at Value Village and figured I’d give it a spin.

The biggest, bestest change we have made is in the pantry.  Now just understand that our pantry is a wreck and this change only involves the spices.  The rest is a work in progress.  Okay — remember – spices.  Here’s the pics: 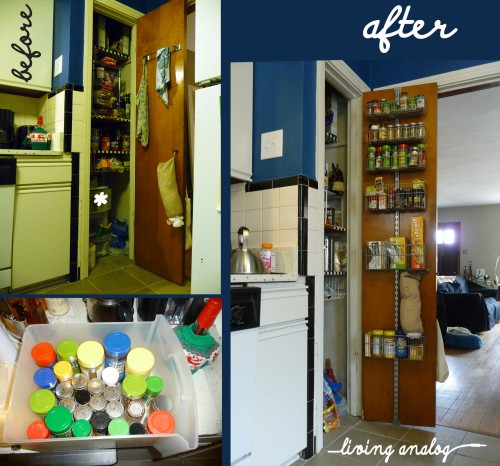 The Elfa Over-the-Door system (also from the Container Store, are we sensing a trend?)  has made cooking SO. MUCH. BETTER.  Before all our spices were haphazardly placed in a pull out bin (see asterisk on the before picture).  In order to get at said spices, you had to pull out the whole bin, search for some precious space on the counter and hunt until you found the right spice (they’re not all labeled on the top).  Thanks to a gift card from my brother and sister-in-law for Christmas we took advantage of the January Elfa sale and splurged on this puppy a little.  But not to despair – it clamps to the top and bottom of the door and tightens down with a screw so we can take it with us forever and ever wherever we go (and we will).  The baskets easily lift off the track for quick spice access.  I could go on and on but let’s just say this thing is the bee’s knees and I love it and want to add a few more baskets.  (Also I just noticed the random black cloth on the sofa in the after picture – I was photographing a guitar for JT’s eBay endeavor and I could see the tan sofa reflecting on the nice shiny black guitar so presto – magical invisibility cloak cloth.)

So just for kicks, I thought I would share with you guys what this kitchen is whipping up:

1. Red Quinoa with Zucchini and Corn from Speed Vegan By Alan Roettinger (this was our first time having quinoa and it was really good!)

4. Cornmeal-Crusted Tempeh with Carrots and Green Lentils from The Candle Cafe Cookbook by Joy Pierson and Bart Potenza (just the tempeh recipe, the roasted carrots are from Door Sixteen – here.  The lentils we had in the freezer . . . )

#6 Brownie in a Mug – Improvised from a recipe/segment I heard on NPR.  I can’t find it on the website anymore but here’s my version of the recipe:

Combine 1T vegan butter, 1T almond milk and a splash  of vanilla extract in a bowl or mug.  Microwave until the butter melts.  Then stir in 1T flour, 1T sugar and 1T dark cocoa powder.  I also added some  peanut butter, the recipe also suggests powdered espresso which I would like to try as well. Microwave for 1 more minute and voila – a brownie in a mug!

This is great since I have a total sweet tooth and JT does not.  Plus there’s only one bowl to clean which is great!  Our dishwasher is about to go on strike.

This entry was posted in Kitchen, VEGAN. Bookmark the permalink.