With all this free time on my hands that retirement affords, I’ve been doing a little baking and a lot of cooking.  For Thanksgiving at my aunt’s amazing side-of-the-arroyo house in Tucson, we were in charge of the dinner rolls.  Thanks to Pinterest, I found a recipe for Sage Rosemary Dinner Rolls (via An Unrefined Vegan)

I got myself all set up in our new kitchen and went to town.  It’s amazing how fast your kitchen can descend into a messy madness when making bread.

I specifically went looking for a recipe that included rosemary as we have a big trailing rosemary plant stationed at the front door. 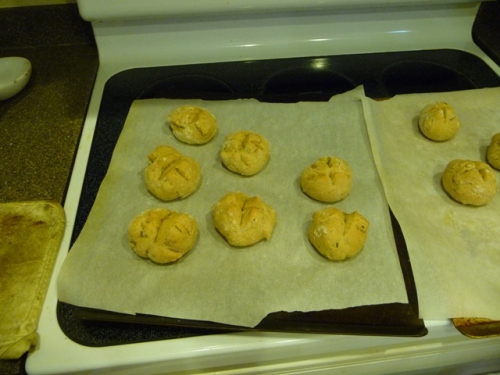 I think they turned out okay but a little tough.  I followed the recipes instructions and kneaded it for exactly 8 minutes.  I think if I had quit when it was all combined into a nice dough ball, the rolls would have been a little softer.  I went to the grocery store later that night and also ended up making a few tubes of crescent rolls too, just in case.

Our at-home Thanksgiving was Chipotle Quinoa Sweet Potato Tacos with Roasted Cranberry and Pomegranate Salsa.  I followed her instructions in the post about the pomegranate and peeled it underwater – it was magic!  The tacos were also magical and made a lot of leftovers. 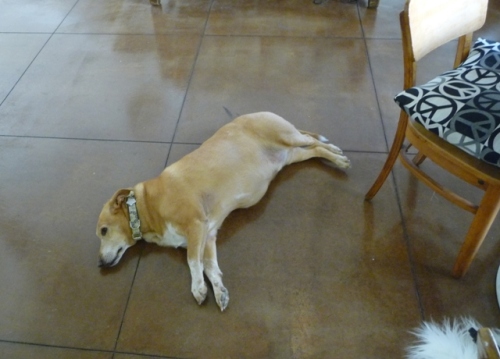 However, Shenanigan is not impressed with all my vegan creations.  He does seem to be enjoying the stained and stamped concrete floors in our new place.  More soon!   Cheers – CT

This entry was posted in Kitchen, Miscellaneous Diversions. Bookmark the permalink.