We moved into our new house in mid-February and I know I haven’t shown much of it here on the blog.  We painted the whole first floor when we moved in and changed out the outlets and switches from almond to white.  We stalled out for a while and we were just kind of living with things to see what was working and what we needed to change.  One thing that needed a little help was our entry way.

See the mess?  (Yes that is a Darth Vader toy thing. It’s going up to the music room but it needed to get hosed off outside first.)  We needed a “landing strip” as they call it on Apartment Therapy. 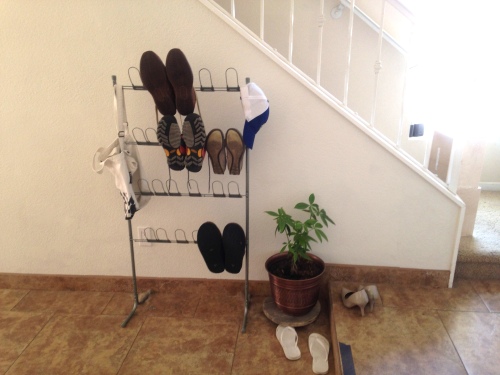 One of the “fun parts” of living in the desert is scorpions and since our new house backs up to the mountain preserve, we have a lot of wild life, scorpions included.  JT found one in his shoe one day shortly after we moved in so we decided it would be best to store shoes in a way that would be not as inviting to any stinging inhabitants.  (We also have a black light flashlight so we can check things out – scorpions glow under a black light.)  You can also see that we were using a painter’s tape floor warning as there is a small step at the entry that is hard to see when the floor is all one tile.  A lot of temporary things.

A trip to Ikea (yes, Ikea again) found us with the Hemmes shoe cabinet flat-packed into our car and this afternoon JT began the arduous process that is assembling one of those things — we have built a few Ikea items and this was one of the most complex.

(Sorry for the dark photos, we just wrapped this up about an hour ago and I wanted to use my Sunday evening to type up a little post. The Hemmes cardboard boxes are even still in the picture there, I am not one of those super slick bloggers, I guess.)

Thanks to Swedish design, we now have a place we can stash our shoes that doesn’t junk up the entry way so much and will hopefully stay bug free.  I think I will eventually change the knobs out to de-Ikea-fy it a little and we talked about maybe putting a more rustic wood ledge on top …. we shall see.

I pulled the blue painter’s tape off the floor and put down four of the Flor “Mod Cow” carpet tiles I’ve been hoarding, I mean holding on to for a while now. 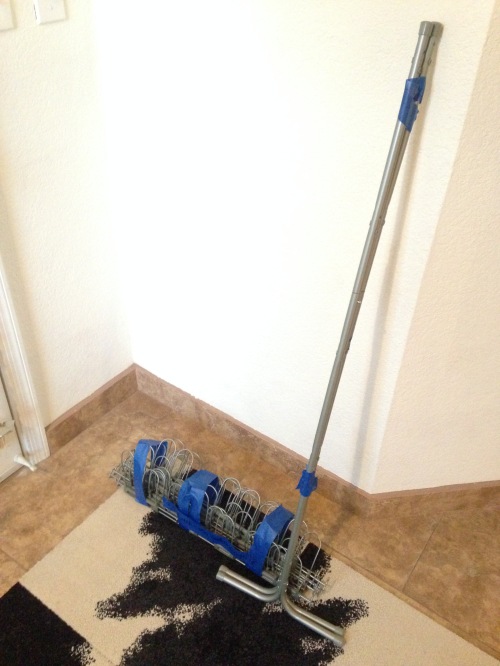 It’s off to Goodwill for the old shoe rack.  We’ve been on a good roll of purging out items we haven’t been using and right now we have two bins in the garage waiting to go.  I also have some plans for that little sliver of a wall next to the front door too – more projects!

Hope you had a great weekend full of successful projects. Cheers – CT

(Another P.S. – I don’t want our gun artwork to seem insensitive in light of current events.  It’s more intended as an ironic statement …)

This entry was posted in Uncategorized. Bookmark the permalink.