A few Saturdays ago,  I convinced JT to go on a Thrifting Adventure with me (that was actually what I put it on the calendar as – “Thrifting Adventure”).  I concentrated on a cluster of resale/thrift shops on Forest Park Parkway in midtown St. Louis – nearby and hopefully prime for the picking.

Habitat for Humanity ReStore was the first stop.  We had an old nasty fan lingering in our basement that needed to be donated.  ReStore can be kind of hit or miss but if you are willing to put in a little time and dig through their offerings, you can get some good deals for projects around the house.

See the whole aisle of tile (above) of trims?  Good stuff.  ReStore had some fancier (for them) pedestal and glass sinks in their inventory during our visit too.

See more photos of what they have in stock at their photoblog.  I was glad to get the fan out of the house (I should have taken a picture of it — trust me it was nasty!) but there wasn’t anything that called out for me to buy at ReStore that day.  Oh except some funky flat files that were, of course, marked Not For Sale.  Does anyone else have that problem?  All the items I like at the Antique (Junk) Malls are always marked with the dubious Not For Sale sticker.  Then why is it there?

Next stop was the Salvation Army.  This entailed walking by some of the “Army” on a smoke break. The whole area is a little on the dicey side.  I love love love industrial buildings though.  Someday maybe I’ll live in one . . .

A few items of interest there . . . make sure to go to the lower level first  for furniture.

And then finally down the street to good ol’ Goodwill.

This place was hopping!  I didn’t even mess around with pictures inside of there because there was so many people.  We just made a quick loop and got out of there.   I do love the facade of this building though — such a neat use of brick.

And so we were headed home empty-handed and I had $20 burning a hole in my pocket from a recent Craigslist sale . . .  then I remembered a St. Vincent de Paul had recently relocated to our South City neck of the woods into what had been a dingy old Office Depot.

Right away I started seeing some good stuff . . . .

(PS – I love this picture below — JT made it almost all they way through the thrifting adventure but a friend called to ask for guitar purchasing advice and he couldn’t resist . . . . You can see him in the background as he wanders away . . . )

And so I found some things to bring home!  Because what I need is more things, right?  You can even see the two alley chairs I recently snagged in the background of that picture.  I may need therapy. 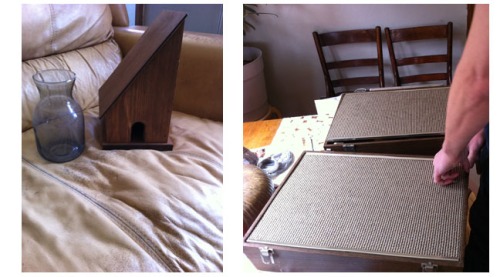 The vase and bird house were $2 each and I think the portable speakers were $8.  JT pried them open when we got home and sure enough, all the parts were in there.  He’s going to iPod wire them and I think they might go traveling with the Rumble Fish (aka Fairlane).  They fold up together like a little speaker suitcase.  I’ll post more on the speakers when they’re up and running.

This entry was posted in Thrifting. Bookmark the permalink.