. . . at least our furry family, the only ones willing to have their photo taken and put on the interwebs.

Shenanigan
We adopted Shenanigan as a baby. . . they told us he was a dachshund/terrier mix.  When he was nine pounds we believed them . . .

Sophie came to us from Stray Rescue.  They do miraculous things for street dogs in St. Louis.  Sophie had been used as a bait dog in her former life, which is a horrible part of pitbull fighting that I don’t even want to go into on this blog.  Her rescue story is still posted at Stray Rescue’s site, you can see it here.

We adopted her when she was about two so Shenanigan would have someone to hang out with.  And hang out they do . . .  I’m pretty sure this is how they spend all day while we’re at work . . .

It’s a dog’s life all right. 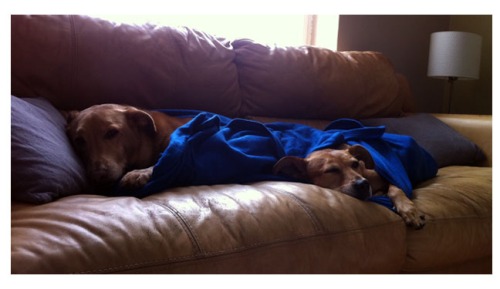 My life’s dream as a proud mother of fur babies is to have them featured on Desire to Inspire’s blogof Monday’s Pets on Furniture.   Yikes, I need a life.  Hopefully Shenanigan will be ready for his close up!  We already know he likes to lounge inappropriately on all the furniture.

This entry was posted in Dogs, Furniture. Bookmark the permalink.