I have a Pignose G40V I bought new a few years back and have since loved it’s simplicity and durability. Due to it’s portability, and the size of the venues Grand Beauty generally plays, this amp has seen a lot of action, mic’d through our PA. I won’t claim to know the official pedigree, but it supposedly was designed by someone who had something to do with the original Fender Bassman amplifiers. This sucker is tiny, with only a 10-inch speaker, and packs a massive 40-watt punch!

Being as cool as it is, I simply can’t leave it alone. Why? Well, it’s equipped with all Chinese parts. Don’t get me wrong- the Chinese are fine people- awesome food, impressive culture. Not necessarily the best folks to be mass-producing tone, though.

Step number 1 was finding an awesome speaker. CT and I happened on the Midwest Musicians Swap Meet in Saint Louis, where I found a great vintage Jensen 60’s 10-inch speaker in new housing. I also came across a couple of Soviet-era Sovtek 12AX7WB pre-amp tubes (to be seen in part 2). 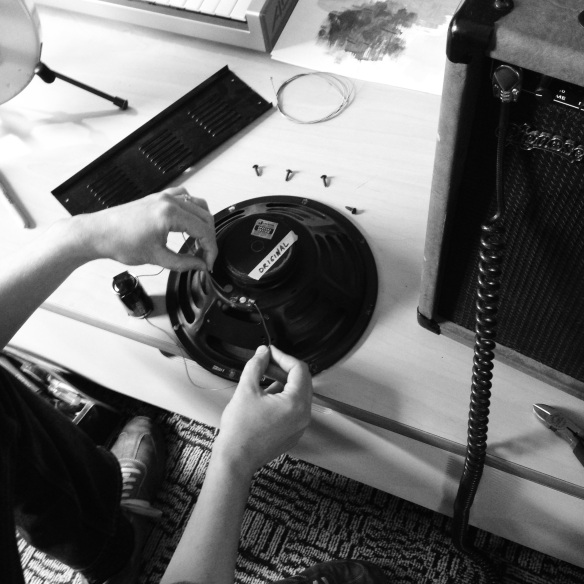 Once I got the Jensen home, I had to figure out which terminal was positive, as neither one was marked. I used an old trick, where you electrical-tape both the positive and negative ends of a D-Cell (or 9-volt) battery with wire, and then connect to each wire to a terminal. When the speaker “sucks in” on connection, you have negative polarity. Reverse the wires, and you should see a “push out” of the speaker on connection. This will be your positive polarity, and you can now mark on the casing the + and – terminals, and connect it to your amplifier.

Jensen speaker mounted in the Pignose

The mounting holes lined up great, and connections were secured. Success! Now my Pignose has a vintage Jensen speaker, rather than the cheap Chinese stock that it came with. Stay tuned for part 2, where I attempt to replace and bias the existing Chinese tubes with Soviet-era, mean-ass Sovteks!