I’ll never understand how the weekends come and go so quickly.  Due to last weekend being a celebration of my 31st birthday and impending adulthood, JT and my family took me out for a good time.  I don’t know if I’ve fully regained my hearing after going to see 4 bands in the span of 3 days.    It was a great whirlwind though!

Friday we had “80s Night” at the Pageant, seeing Tom Tom Club and Psychadelic Furs.  Both groups were high energy and still have it 30 years later.

But first JT had taken me to dinner at Winslow’s Home on Delmar.

Not only was the food yummy and you could order wine from their wine room, it’s also a “New American General Store”.  I’m not 100% sure what that means except that I like it . . .   I had to really crop down the picture on the right as Mr. T doesn’t necessarily want to star on the blog, but look at all the fun things on the shelves behind that handsome man in flannel.  I didn’t make it out of there without treating myself to a few items.

Saturday and Sunday was the Taste of St. Louis.  I had never been before so I wrongly assumed that it was a poorly attended event (because if I wasn’t there, then probably nobody was there, right?).  Whoa was it crowded.   I saw Fitz and the Tantrums on Saturday and The English Beat on Sunday. 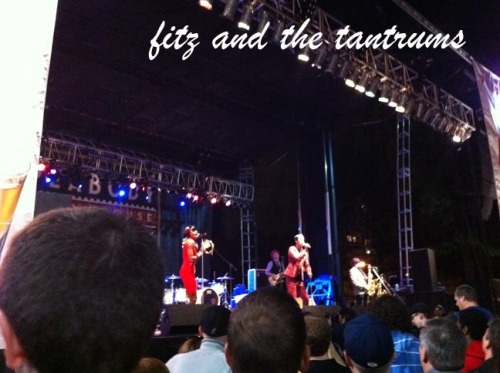 (Have I mentioned before that my photography is horendous?  Plus there was a 7 foot tall man in front of me at the Fitz show.)

The Peabody Opera House is about to reopen and was hosting a preview night.  Somehow my sister and her boyfriend pilfered tickets on Saturday night and instead of being down in the crowd looking up at the Peabody balcony, we ended up on the balcony, looking down on our subjects below.

It was a pretty awesome weekend!

Now back to your regularly scheduled programming. . .

This entry was posted in Miscellaneous Diversions, Music related. Bookmark the permalink.