Hey everybody!  We’ve been traveling down south – Clarksdale, Mississippi then Tunica then MEMPHIS on a musical mecca of sorts but we’re back to reality now.   Along with traveling, we also used our vacation time to do some work on and about the house.  So even though we’re back to a 40 hour work week, I’m dreaming of some backyard zen.

Remember a while ago when I posted this dream/inspiration image (that I still can’t find the source for, damn you internet)?  Here it is to refresh your memory. 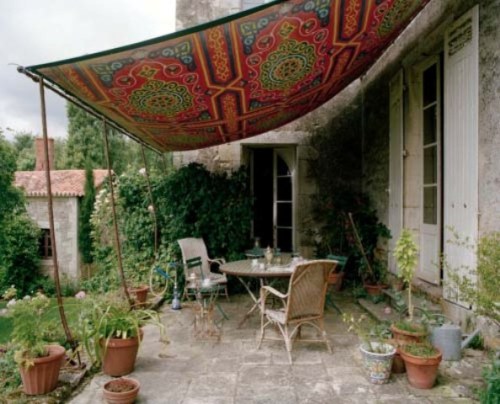 I started out with this spot when we tilled up the backyard:

The table is haphazardly placed and may not stay there ($10 Craigslist score, I’m thinking it will also meet the spray paint fate that gets everything else here), but there’s some (admittedly slow) progress there.  Let’s rewind.  I started out with 4 of the orange work buckets from Home Depot.  I think they were about 3 bucks a pop.  Next I attacked them with my trusty blue spray paint. (Yes I may have a (blue) spray paint addiction.)

I added in some bricks in the bottom and cemented in poles with eye hooks screwed into the top.  This will be a future canopy holder so I measured out two rods at seven foot and two rods at 6 foot so the canopy will slope a little and not hold water. 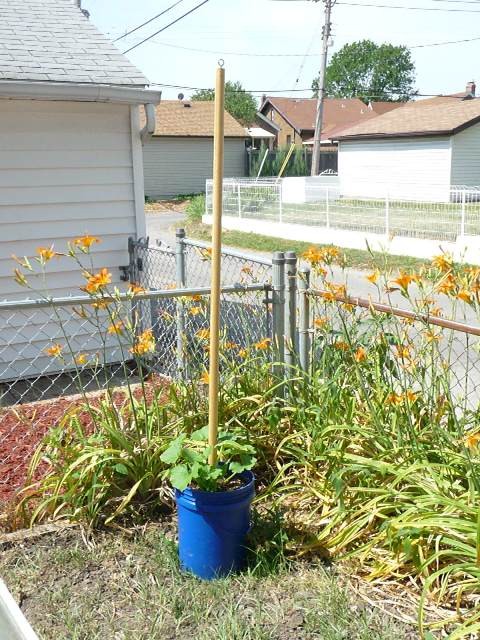 Since the raised bed area has been our garden in previous years but is being converted to the zen spot, we didn’t want to lose all our food growing capabilities.  The canopy post buckets became the garden instead.   Before I filled the magical little blue buckets with dirt and plants, I drilled four holes around the bucket right above the concrete line so water can drain out.  (And yes, I’m actually getting pretty proficient with the drill.  That is one power tool even a lefty can use!)

Instant (small) garden.  We have tomatoes in one, hot and mild peppers in another, zucchini in a third and the fourth has beans and some salad mix.  Which should, fingers crossed, yield enough vegetables for two vegetable-eating adults.

So . . . now I only have a few more (hundred) little things to do before the zen spot is complete — mulch over the raised bed, get a canopy/canvas, maybe stain the poles and then install some twinkle lights and get a crap-load of citronella to keep us safe from the swarm of bugs that has descended on STL this summer.

More updates to come, Memphis and the Green Shag Market sale!  Of course I couldn’t miss it!  But since the house is full to the gills, I actually refrained from buying furniture (mostly) and instead picked up many other miscellaneous things.  You know I love to tease!

This entry was posted in D.I.Y., Yard Work. Bookmark the permalink.