Don’t Worry, I Didn’t Fall In

After a long and list-y post about bathrooms and then a week of no blogging, it occurred to me that you guys might think I have had an unfortunate mishap with one of our bathroom fixtures.  Not to worry, I didn’t fall in.

Although I did squeak in Item #1 (Apply textured wall finish as primer coat to walls and ceiling)  from my “To Do” list, I’ve also been buried under a mountain of furniture.  And not the stuff I’ve been hoarding in my basement.  No, we just had a big furniture bid package go out at work yesterday and it took up literally every spare minute of my time.  I have a hard time with this whole “balance” concept and always seem to fall off on one side or the other.  These last few weeks, work won the delicate tug-of-war that is my life.

But enough complaining! (although I will say if you had to specify three floors worth of furniture for a new building on a small midwestern college campus, you might complain a little too . . . ).  Onward and upward!  By announcing my “One Month, One Project” goal to the interwebs, I was also gave myself a few days head start and used up the last weekend in July to texture over our un-smoothable bathroom walls.  It was a simple matter of buying a little jug of Sand Finish paint additive for around $4 at Home Depot and mixing it up with a gallon of white paint the previous homeowners had left in the basement.  It took a few coats to get an even texture but I think it will be worth it in the long run because it covers up all the weird patches and ugly bits that were making me crazy.  At the end of the day, it is a little more texture than I would have liked but I also just wanted to stop obsessing and be done!

I snapped these pictures this morning . . . the nasty light fixture is now done to three bulbs.  Soon very soon, he will be all the way gone and I will be so happy!

So, texture.  Next step is paint.  Although the blue we had picked for the bathroom was much darker than the blue we used in the kitchen and music room, it was reading so much lighter in our little bathroom.  Like almost the same.  Since I did the texture primer, I figured that gave me an opportunity for a fresh start with the paint color.  I picked up a gallon of Sherwin Williams “Sea Serpent” last night and I think painting will be happening tonight.   I grabbed a generic bathroom image via the   Sherwin Williams Color Visualizer to test out our new color —  it was the closest thing they had to our bathroom — some white beadboard and some painted wall surface.  Here’s Sea Serpent in action: 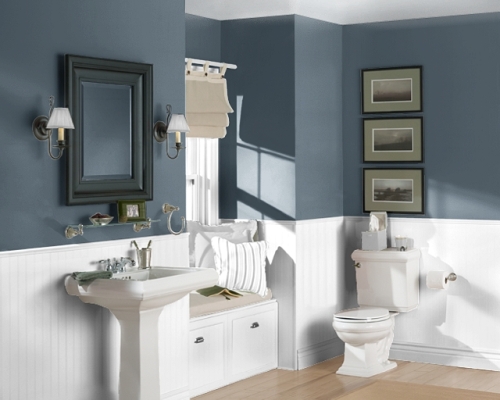 A little grayer, not so “happy” blue as the kitchen.  Just what the doctor ordered. And on the ceiling too, it’s going to be so nice!  And one step closer to One Month, One Project completion.  I also may have done a little internet shopping/ordering last night as well . . . the things I can fill my time with when it’s not absorbed by work (Enough complaining CT!)

Since we are speaking of bathrooms, I thought I would share that my sister-in-law has also shared a makeover of one of hers and started up a blog!  You can see all the details at French Grey and Chrome: www.fgchrome1.blogspot.com . The Interwebs welcomes another Thompson to its midst.

This entry was posted in Bathroom. Bookmark the permalink.