Monday again.  Yoinks.  Last weekend didn’t seem nearly as productive as I wanted (but is it ever really . . .) but we did get a few little things done, mainly in the kitchen department. 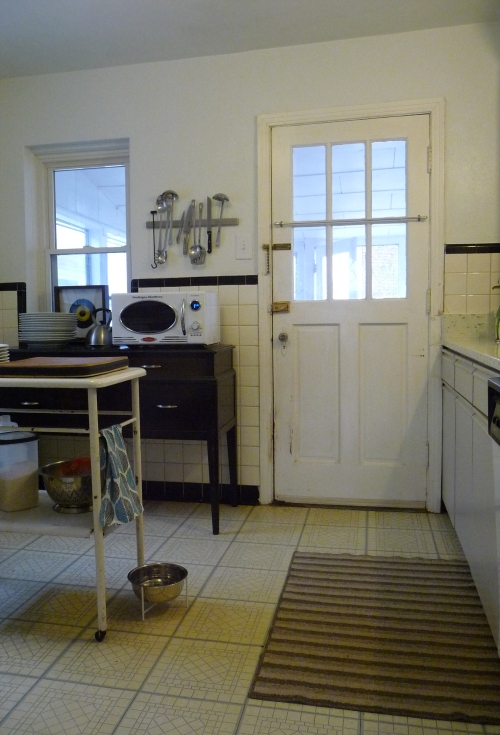 A new microwave!  Retro style!  Thanks to an Amazon gift card and selling the old bulky black one on Craigslist (finally something sold!)  this one was a break-even change.  The new microwave is just a few inches smaller than the old one but it is so much “lighter” visually.  The white color and the smaller size really help it feel more at home on the buffet.  And I couldn’t resist the retro styling. Although it does have some new annoying beeps.  Oh well.

Also, you may notice in the photo above, JT installed a cafe curtain rod for me on the back door.  Fabric has been purchased for said cafe curtain rod . . . we’ll see how much I have to fight with my sewing machine before these curtains get produced.

Another item we tackled this weekend was the big cutting board sitting on the island cart.  It had gotten really junked up and we hadn’t used it for a while.  I took it down to JT’s basement lair where he power sanded it for me and then I treated it with 3 coats of Howard’s Butcher Block Conditioner.  It’s food-safe and gave a nice luster back to the ol’ cutting board (an IKEA grab.)

Peeking out from behind the teapot on the buffet you may just be able to see a 45 record.   It’s one of JT’s favorites, Carl Perkins and it’s got the Sun label on it.  JT received it as a gift from his brother and sister-in-law. (They give good gifts — remember the Eames rocker?) We had it in the music room for a while but the black vinyl record wasn’t quite “popping” against the black background.

One piece of white canvas and some painters tape later, it has moved into the kitchen as a cheery little rock n’ roll memento.  (We all went on a family trip to Memphis a few years ago and JT really enjoyed Sun Records.  In fact I think he almost had a stroke when the tour guide started playing the piano that Jerry Lee Lewis used and he could touch the guitar used by Scotty Moore.)  The nice thing is that this is a totally reversible operation — all I would have to do is remove the tape and fabric and we’re back to a black background.  The song featured is “Dixie Fried” which I thought had appropriate kitchen connotations. 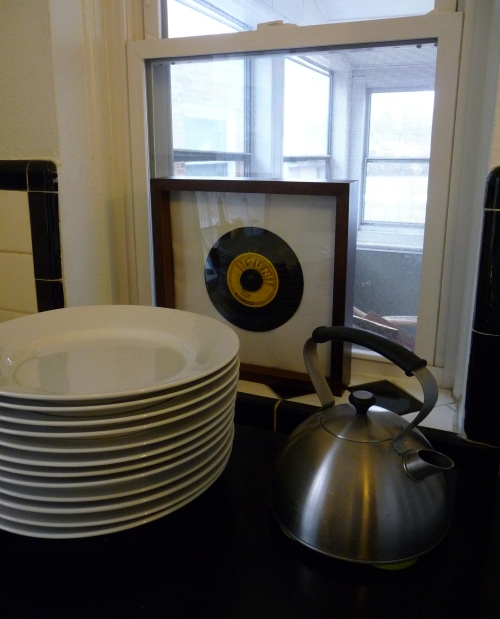 The record actually does play and we have an MP3 recording of it from our vinyl ripper that JT did before it was framed up.  I’ll have to scout around and see if I can add it to this post.  I definitely will cue up some Carl and maybe a little of his friend Elvis to get me in the mood as I work on the new curtains.

Update: I found the “Dixie Fried” MP3 file from our vinyl above.  You can listen to it here: 02 Dixie Fried.  Enjoy!